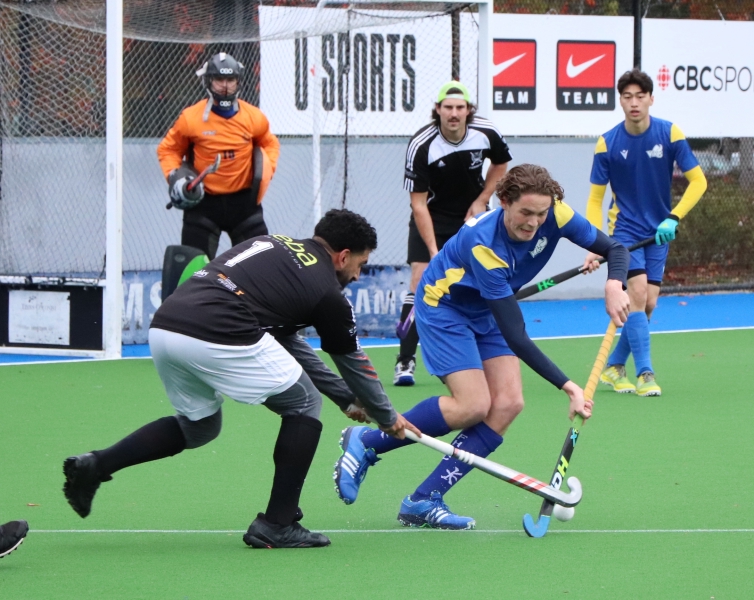 On the heels of a dramatic 2-1 win that clinched a fourth straight U SPORTS national women’s field hockey championship crown Saturday for the home turf UVic Vikes, the four Vancouver Island Field Hockey Association teams in action kept the drama going Sunday.
Javier Virk’s second goal of the game for Tigers came in the final minute and proved the difference in a 3-2 victory over the men’s Vikes in the day’s thrilling opener.
The defending competitive division champions, who improved to 3-0-1 with the win, never trailed in the contest.
A long lead pass to a waiting Virk deep in Vikes territory saw the sniper convert a breakaway to make it 1-0 in the opening quarter.
The Vikes responded well, pushing for the equalizer almost immediately. It took until the second quarter for their efforts to pay off, however.
Vikes’ Ralph Rietveld carried into the D and created enough space for himself to let go with a back stick shot that sailed over the shoulder of Tigers keeper Tom Pennells and into the top corner.
After the Tigers’ Jesse Kaloti popped home a rebound on a short corner in the third quarter, Rietveld tied it up again on a tip-in.
The Vikes pressed hard as the rain intensified through the fourth quarter, but it was the Tigers who notched the winner barely ahead of the final whistle.
UVic dropped to 1-2-1 with the loss.
Culminating the well-played recreational division game that followed, Marauders’ Brayden Chatlain notched the 2-2 goal on the final play against Hawks, giving his team its first point of the season.
Goals by Bobby Virk and Rajiv Dillon had given Hawks a 2-1 lead in their first non-jamboree game, after Thomas White opened scoring with a shot from the top of the D for Marauders in the first half.
The Nov. 13 schedule sees another two-game card, with Rebels 2 playing Hawks in the rec opener at 10:30 a.m., and Rebels 1 taking on Tigers in the competition division match at noon.