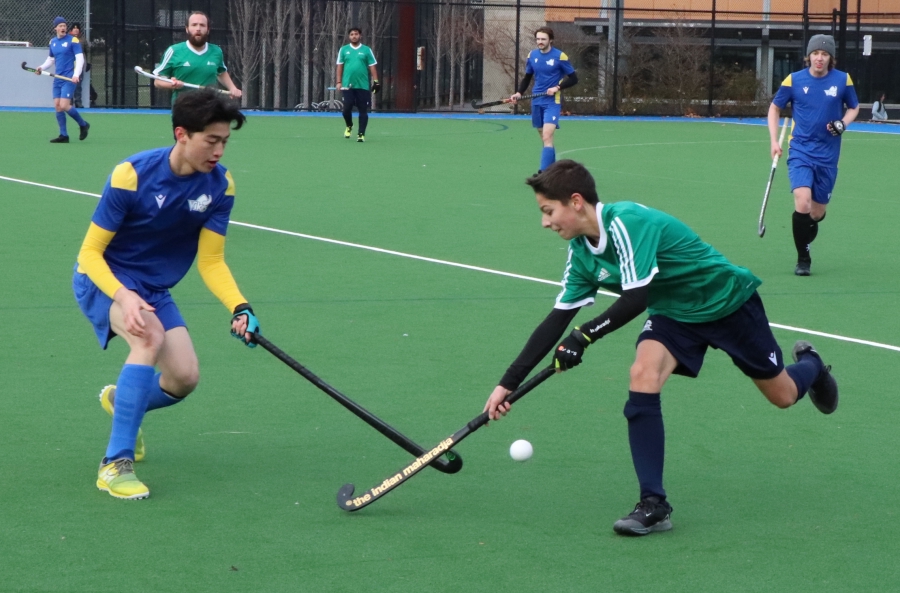 Heading into the final weekend of the fall season in Vancouver Island Field Hockey Association play, defending league and playoff champion Tigers continue to keep opponents at bay, remaining undefeated in eight starts.
But there are signs other teams are getting closer to solving the Tigers riddle.
On Sunday (Dec. 4) the champs scored a slim 4-3 win over Rebels 1 to bolster their lead atop the competitive division standings.
Josh Brown extended his goal-scoring streak to three games since returning to the Tigers roster in November, putting two shots past Rebels keeper Felix Randall to lead the attack. Brown now has five goals on the season.
The winners also got singles from Jesse Kaloti and Vardeep Gill. National program member Johnny Jacoby, making a rare appearance this season, notched a pair to lead Rebels, while Gavin O’Halloran scored once.
For Tigers (6-0-2), the win followed a rare 0-0 draw against UVic Vikes on Nov. 27.
The combination of the Rebels loss and the Vikes’ 4-1 victory over Mutineers pushed UVic (3-2-2) ahead of Rebels into second place.
Grant Simpson scored twice for the Vikes in the win, with singles contributed by Finlay O’Callaghan and Ralph Rietveld.
Mutineers, their depleted numbers boosted with the addition of four players from the club’s Marauders recreational team, were outrun by the young students for most of the game but did manage to score on a short corner when Mark Baggott put one past Colbey Geber.
This Sunday’s matches on the turf at UVic see Rebels 2 take on Hawks in the rec division at 10:30 a.m., followed by Rebels 1 vs. Vikes at noon and Tigers vs. Mutineers at 1:30 p.m.
– Don Descoteau