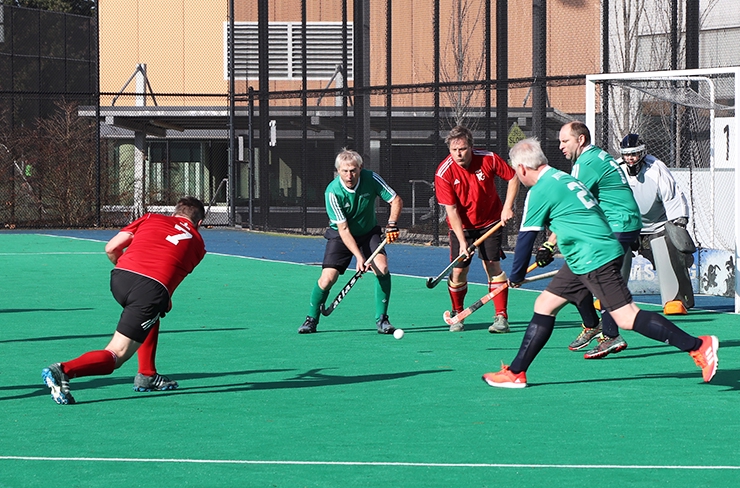 Two goals from field hockey “rookie” Dale Kirk and singles from the Wheatley brothers, Calder and Ben, carried Rebels 2 to a 4-2 victory over Mutineers in Vancouver Island Field Hockey League play Sunday (Feb. 6) on the UVic turf.
The win was Rebels’ sixth of the season against just one loss and keeps them atop the recreational division table. The loss evened Mutineers record to 1-1, having joined the fray at the start of the second half of the season. Peter van den Berg tallied both goals for the men in green.
Also on the day Hawks got past Marauders 3-2, paced by a two-goal performance from the always elusive Javier Virk and one from youngster Devin Virk. Scoring for Marauders were Chase Stiles and Tom Vincent.
The last game of the day saw UVic Vikes emerge from their winter break to post a 4-1 win over Rebels 1 in competitive division play. The second-place Vikes were led with a three-goal performance by Arthur Valdivieso and pushed over the .500 mark with their fifth win in nine games. Former Rebels player Ryan Knight also scored for Vikes, while Daniel Gillott tallied for Rebels.
Next week’s rescheduled competitive game between the front-running Tigers and the Vikes starts at 9:30 a.m., followed by Marauders vs. Rebels 2 at 11 a.m. and Hawks vs. Mutineers at 12:30 p.m.
PHOTO CAPTION:
Rebels 2’s Chris Wilson rips a shot toward the Mutineers net and goalkeeper Tom Pennels, as defenders Erik Kjekstad (left) and Jason Read try for a block and Rebels’ Chris Davis looks for a tip-in. (Photo by Kelvin Kung)