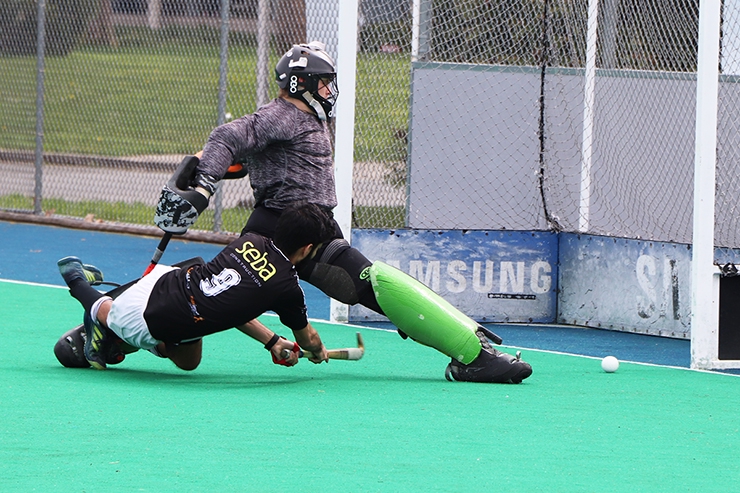 It was about as close as a final game could be.
While the Tigers came into Sunday’s Vancouver Island Field Hockey Association competitive division championship game as the favourite to hoist the trophy, they came up against a rather shorthanded UVic Vikes team determined to bring their ‘A’ game to the turf.
With both teams playing clampdown defence through much of regulation, the low-scoring, few-chances affair wound up 1-1 after four quarters, and went straight to a shootout.
Tigers’ Josh Brown ended it all and secured the cup for his team when he scored for a second time in the thrilling sudden death showdown, beating Colby Geber for the tiebreaking fourth goal.
Brown, perhaps Tigers most dangerous player when he is in the lineup, was held largely in check by the Vikes’ backs and midfield earlier, but was sprung free late with about six minutes to play in the fourth quarter. He sprinted into the D to Geber’s right and after a brief scuffle with a defender, fed trailer Javier Virk a short goalmouth pass that was tapped in for the 1-0 goal.
But the Vikes did not give up or hang their heads despite the late stage of the game.
Having earlier been denied on one of the best scoring chances of the second half, when Tigers keeper Tom Pennells cut down the angle facing Vikes star Johnny Jacoby head on, and kicked out Jacoby’s rocket, UVic kept pressing in the dying minutes.
To no one’s surprise, Jacoby was central in the play that led to the tying goal. Making the last of several quick runs down right wing in the game, he penetrated the zone almost to the backline, drawing a crowd of defenders, then fed player-coach Derrick Norton in front. Pennells worked to intercept the pass and both he and Norton went down, but the latter managed to get a low shot away that was just out of the keeper’s reach to make it 1-1 and ultimately send the game to penalties.
Coming off a 3-1 win over Rebels 1 in Thursday’s semifinal, Vikes came in as underdogs in their chances to hand Tigers only their second loss of the season (Vikes beat Tigers back in September). That status appeared solidified when they started the game with just one spare, while the Tigers had several reserves on hand.
Play was pretty even through the first half and when the buzzer sounded to end the second quarter with the game still scoreless, it likely played more into the hands of the Vikes than Tigers, who had previously outscored opponents 88-20 this season.
So, after regulation it was still anyone’s game, with each team sending five shooters out to try and beat the opposing goalkeepers.
Tigers scored on their first three shootout attempts, with Virk, Amardeep Sidhu and Brown tallying, with Vikes’ Jacoby and Norton replying. But things got interesting when UVic’s Ryan Knight scored and Tigers John Sharp shot wide, leaving it 3-3. Neither team’s fifth shooter scored, so the rotation came back to the beginning.
Jacoby tangled back and forth with Pennells but saw his shot hit the post, setting the stage for Brown to notch the winner.
The warmup to the final saw the four VIFHA rec division teams, Hawks, Rebels 2, Mutineers and Marauders compete jamboree style by playing each other once each in slightly shorter games with two 20-minute halves.
There were plenty of smiles afterwards for a fitting end to their 2021-22 season, one that saw various challenges due to COVID-19 health protocols.
Adding to the smiles was the provision of the curry lunch provided by the Hawks team, a well-earned treat for those who played and umpired – and even a handful of lucky folks on hand for the game.
– Don Descoteau
For a collection of photos from the competitive final and other games, visit Vancouver Island Men’s Field Hockey – VIFHA on Facebook (https://www.facebook.com/GVmensFhockey/)