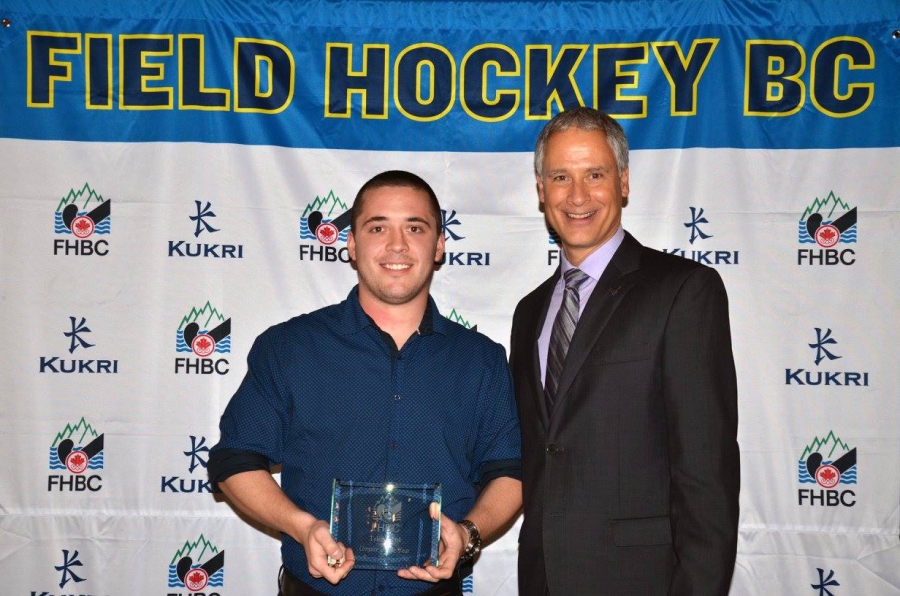 Field Hockey BC hosted their Annual Awards and Volunteer Recognition event on Friday, Nov. 25. Vancouver Island was honoured as St. Michael’s University School senior and Lynx 1 defender Anna Mollenhauer was named U18 Player of the Year. CIS Umpire of the Year Tyler Klenk was named Field Hockey BC Umpire of the Year after earning his international badge this year, while long-time Sailors Club President Ronnie Lee was awarded the Barbara Schrodt Award for contributions to women’s field hockey in BC. In the category of Governance Support, Gillian Batey was honoured for her leadership and contributions in umpiring. Cowichan’s Stan Bennett and Heather Goodman were honoured as Volunteers recognized for their dedication and contributions to Cowichan Field Hockey.

ANNA MOLLENHAUER – U18 Player of the Year
Anna’s Team BC Coach writes; ‘In a team game, on a team of our top athletes, it is hard to find one athlete that stands out. This year Anna was an athlete that took things to the next level. Her commitment to the team and her hard work shone through both on and off the pitch. At nationals this year it was Anna’s fitness, her ability to stay calm under pressure, and her competitive drive that helped lead the team. Her ability to know how and when to use her skills helped the team to capture Gold at U18 Nationals. Anna, is a very intelligent, creative and coachable athlete. She was a credit to her team and fully deserves this recognition.’

RONNIE LEE – Barbara Schrodt Award for contributions to Women’s Field Hockey in BC
The Sailors Field Hockey Club is the oldest women’s league club on Vancouver Island – over 50 years and counting. Now grown to include a women’s team in each of the three divisions, as well as two men’s league teams, the Sailors Club has been fortunate to have Ronnie Lee as both a player and its club president for an impressive 31 years. Outside of her regular duties as Sailors club president, Ronnie has spent time on the VILFHA executive, originally as Director of Membership and now as Director of Operations. Ronnie was a volunteer at the 2008 Women’s Olympic Qualifier tournament, and is a prominent volunteer on the technical table at National Championships, Canada West Games, Bridgman Cup and any other Victoria-hosted tournaments. Ronnie has helped organize a team to attend the Vancouver International Tournament and the Master’s Tournament for a number of years and organizes weekly summer drop in sessions for Victoria. Her efforts, dedication and commitment to the sport of field hockey were honoured by VILFHA as the Christine Trophy Winner for Ability, Sportsmanship and Service in 2013. A travel agent by day and a committed field hockey volunteer for life, Ronnie is most deserving of the Barbara Schrodt Award.

TYLER KLENK – Umpire of the Year
Tyler is seemingly a young hockey umpire, yet he’s blown a whistle for almost ten years already. Starting at the age of 14, Tyler has worked hard to challenge himself and move up the hockey ranks, both as a player and an official. His work ethic paid off as a player, with selection to the University of Victoria Vikes in the Vancouver Men’s Premier Division and caps with the Junior National Team. He applied that same drive to his umpiring career with appointments to National Championships, Premier Men’s Division, BC Provincial Championships, CIS, Canada West, the 2015 Canada Cup, and the 2015 California Cup. He was named the 2015 Canada West Umpire of the Year. Tyler’s big debut onto the international stage came this past May, at age 23, with his appointment to the Junior Men’s Pan Am Championships in Toronto. He surpassed all expectations of a rookie international, with well-earned nods to both a semi-final and the bronze medal match. Tyler has since followed that up with a great performance during the Canada-USA Test Series. It’s obvious that both the FIH and PAHF have taken notice, as Tyler is now booked to umpire at the 2017 Men’s Pan Am Cup in Lancaster, Pennsylvania. And this just the beginning for Tyler.

GILLIAN BATEY – Volunteer Recognition (Governance)
Gillian stepped down from her role as Umpiring Director for the Field Hockey BC Board of Directors this past spring after four years in the role. During this time, Gillian has been a central figure in driving the strategic direction and supporting structure for officiating at Field Hockey BC and in doing so, has contributed to the Society being regarded as one of the top Provincial Sport Organizations in British Columbia. Gillian has volunteered her time to mentor young and experienced umpires alike at all manner of local, regional, and national tournaments, continues to work within junior and senior leagues, and is an invaluable resource as we look to continue to improve standards in officiating across BC.

STAN BENNETT – Volunteer Recognition
Stan Bennett has held the position of 2nd Vice President for Cowichan Field Hockey Club for a number of years now, he is one of the junior coaches, has been directly involved in Cowichan’s indoor program for many years, he plays point in the distribution of uniforms and equipment for the club and has spent many hours building equipment for the club, including the equipment locker used to this day. We hope this award goes some way to thanking Stan for all that he has done for the club.

HEATHER GOODMAN- Volunteer Recognition
Heather Goodman has volunteered countless hours during the years her daughters have been involved with Cowichan Field Hockey Club. She is an organizer extraordinaire, helping co-ordinate field hockey events for our members of all ages. Heather was the Junior Coordinator for five years and is currently the club’s 2nd Vice President. We again hope that this award goes some way to show the Club’s appreciation.

For more on the FHBC Awards and Volunteer Recognition visit: http://fieldhockeybc.com/Home/FHBCAwards/tabid/527/Default.aspx